“Pan is an ancient Greek deity of nature, mirth, music, and fertility. Pan is famous for his sexual powers, and is often depicted with a phallus. Diogenes of Sinope, speaking in jest, related a myth of Pan learning sexuality from his father, Hermes. Pan was Hermes son and his mother was a wood nymph.

One day Hermes wrapped the little guy warmly in a blanket and carried him off to Mount Olympus. Pan was the delight to many of the gods and goddesses. Pan was a merry little fellow. Even Mars liked him a bit.

With Zeus’ permission, Hermes gave his son the job of watching over shepherds and huntsmen. It was a perfect job for Pan. He loved to play in the woods and the meadows. He loved music and dancing and singing. He made friends with many of the meadow and wood nymphs. He made a musical instrument from willow reeds called “panpipe.”

Pan’s greatest conquest was that of the moon goddess Selene. He accomplished this by wrapping himself in a sheepskin and drew her down from the sky into the forest where he seduced her. 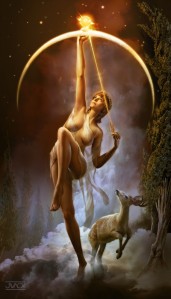 The goddess of the hunt, Artemis (who seemed to dislike men), made sure to honor Pan. As a child, Artemis had asked from her father Zeus to remain an eternal virgin and therefore became one of the three Virgin Goddesses in Greek mythology. She is like a cool goddess with an untamed spirit described by some as a tomboy and does not like to gossip. Artemis had absolute sovereignty over nature and was said to bring fertility to all places that worshipped her. Usually accompanied by Nymphs, Artemis loved to hunt with silver arrows dipped in poison.

A lovely young woman with lustrous dark hair and cool, dark eyes. She has the build and strength of a ballet dancer, she is perfectly proportioned but stands a head higher than the average man. Out in the wilderness, you’ll recognize her by her youth, beauty, and the bow and arrow in her hand. She symbolizes the untamed spirit, never being tied down by things such as love, being the eternal huntress of the forests. Artemis was famous for her hunting skills, especially with her silver bow and arrows. She had an unwavering aim that never missed whatever target she chose. She was a very able hunter, proving it by taking down some of the most god-awful beasts with not so much as a strain of drop of sweat.

Her dad Zeus gave her many gifts, including her silver bow and arrows, which could strike down enemies from heaven, and her massive hunting hounds. She had a huge soft spot for those dogs, who followed her around wherever she roamed. The moon is one of her many symbols, and her favorite hunting grounds were the mountains. Zeus also gave her a beautiful hunting chariot made by Hephaestus, which was pulled by two huge stags (male deer).

To add to all of that, she also had a group of 80 virgin nymphs who would join her in her hunts, all of who had to swear off men for eternity to hunt with the goddess. Artemis was very protective of the chastity of her nymphs and was angered when they didn’t keep their purity. In the case of one of the nymphs, Callisto, Zeus had disguised himself as Artemis and took advantage and impregnated Callisto. Artemis was furious that she was no longer a virgin and blamed her loss of purity on her. The goddess then immediately, irreversibly turned her into a brown bear with the intent to hunt and kill her. Artemis had a bit of a temper.

Artemis was a private goddess. There are not too many myths about her. She absolutely, positively, no question about it, resented anyone who intruded upon her. Once upon a time, a long time ago, there lived a famous hunter. His name was Actaeon. Actaeon quietly crept up on the steam to see who was laughing. Imagine his amazement to discover it was the goddess Artemis, along with some of her attendants, splashing in the stream. He was young, and foolish, and arrogant. Instead of leaving, he moved out onto the bank, and boldly stared at Artemis. Artemis splashed him with water and Magically, he changed into a deer. 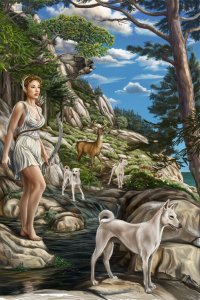 Artemis also had a nickname: “Goddess of Light.” As that title might tell you, she had the divine duty of illuminating the darkness. Artemis was often shown carrying a candle or torch, lighting the way for others, leading them through places yet undiscovered.

A little rough around the edges at times, but Artemis truly proved herself to be one of the Olympians, putting her right up there in the Top Twelve. Despite her “wildness” and her refusal to conform to the usual ways of doing things or tradition, and her fierce independence, Artemis was shown as being one of the compassionate, healing goddesses. Of all the Greek goddesses on Olympus, she was the most self-sufficient, living life on her own terms, comfortable both in being by herself and also in becoming a leader when she needed to be. Artemis gave people courage, lending them her strength to bring them safely through their fears. Artemis was literally born to serve as a nurturer and protector and was forever known as a protector of all things young and newborn. In fact, all creatures of the wild, especially the deer, were sacred to Artemis.”

This is some interesting stuff on Adam and Eve. That serpent maybe was related to ego… For some reason this trickster had some power to place that tree in the Garden. Maybe that was the first invasion of the yukky Annunaki. And the apples on that tree were poisoned, and then Eve got tricked and poisoned and since Adam and Even were the same being, Adam got poisoned too, although he didn’t really make any mistakes. I think Adam and Eve were twin flames. Although they were the same being, they were also separate/independent/individual at that time for some reason… So that means that despite the separation one could still have a huge affect on the other! Because both of them got kicked out of the Garden.

Lesson here is be considerate of the other! Become whole. Present reality is that now all is merging with love and higher heart and everyone is becoming whole and pure. Surrender and flow with the white, aqua, blue, violet, and rose love waves and all will be peachy!

Here is a link: http://www.spiritofthescripture.com/id282-adam-and-eve-the-story-of-human-consciousness.html

This information was taken from various sites on google and synthesized by Liliya.