Angels came to visit me when I was having a hard time ❤ Raptar being a patient champ!

I had a dream that I was running really fast on gravel and then I when I would make a turn it felt like I was riding a snowboard and making a turn, like gliding but with my feet. Now knowing what it feels like, I can go to this feeling again. I think this was a little activation from taking care of a white beautiful fluffy American Eskimo dog. On one of our walks when I ran after and slightly lean back a little while I run, he truly does pull me and makes running easy! Then I pretended I was in Alaska and he is pulling me through the snow. Wow what a little story! haha 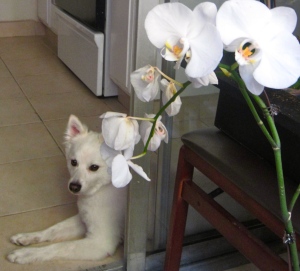 Found a beauitful little park with man made waterfalls and fountains with Raptar. So peaceful and clearing to be near water. There was some sort of interview filming happening. The woman who was being interviewed wore a gold cross. The film crew looked serious and worked in silence. Then! Little Magical Raptar said Hi to another cute creature. The other creature was not on a short leash as was Mr. intense Raptar. Anyways, the white fluff ball presented himself with such confidence and grace that the other creature ran towards the crew in happiness. His arrival made about like 5-10 people smile 🙂 It was like little Christmas lights were going on, one smile after the other…. one light after the other, it looked like they were lifting. haha! Conclusion? Smile more! duh 😉 Who doesn’t want to look like a Christmas Tree? lolz.